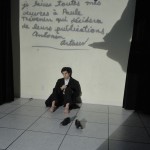 Deceptively simple in concept but mystically charged, Adam Paolozza and Michelle Smith’s production of Artaud: un portrait en décomposition stimulated both mind and spirit. It was delightfully visceral for such a seemingly dark-themed play.  Bare bones yet meaty, this was the type of theatre that got under your skin, hitting both hard and fast. In fact, this play reminded me of the essential elements necessary for great theatre, budgets notwithstanding.
The play wove together Artaud’s letters and writing as well as those of colleagues and friends, with bits of fictional stitching thrown in. Antonin Artaud (1897 – 1948) was active in theatre, literature and cinema in France in the 1920’s and 30’s as actor, playwright and advocate. Described as the surrealist that the Surrealists disavowed, he waged a never-ending battle to be seen and heard. Probably best known for championing the Theatre of Cruelty, Artaud insisted that emotional truths drive each play. Despite the logistical nightmares present in both his treatises and practices, he is cited with influencing the later movement of Absurdist Theatre and, specifically, masters such as Ionesco and Pinter.
Adam Paolozza gave an exhilarating and vitally dexterous performance, carefully balancing nuanced meditations with Artaud’s infamous outbursts. At the same time, his acting created a crescendo which operated in conjunction with the play’s movement from passionate intellectualism to wrenching biography. No small feat, Artaud: un portrait en decomposition became the theatrical actualization of Artaud’s inner world. As Artaud’s mental health began to fail he became a desperate individual crying in an increasingly isolated wilderness, a mere shell of the original artist/genius self.
With its stark lighting, minimalist design and deliberately precise tempo this play was not only true to the spirit of Artaud’s work but practically conjured his ghost. The play’s few meagre props were continually transformed over and over again with magical ease. The central piece, a rocking chair, became an ever increasing visual symbol of the menacing turns that were about to take place. Artaud: un portrait en décomposition was truly a haunting experience.

Posted by Barbara Goslawski at 1:41 PM